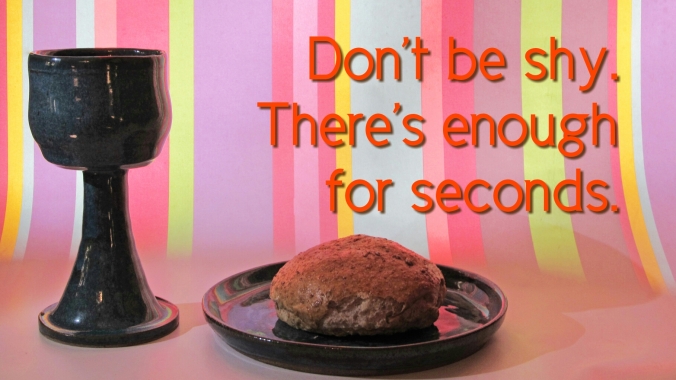 Several weeks ago I was having dinner with friends and the conversation turned to childhood memories, specifically memories of dinner time. Our experiences were somewhat different. One of my friends explained how in his large family the younger children were lucky to get much, as the father took his food first, and then the oldest children, and so on. By the time the youngest ate, there was always something left, but it could be pretty meager. My own experience was different. We did not think of ourselves as wealthy – my father brought home a teacher’s salary and worked part time in a grocery store – but whether we ate at home or out, we three children were served or could order portions equal to that of the adults. I remembered it being the same way at my grandparents’ table, and with my aunts, uncles, and cousins as well. This, I said, seemed much more fair. Then my friend explained that in his family if his father didn’t keep up his strength and ability to work, there wouldn’t have been food on the table at all. Suddenly I was confronted by the reality of my own privilege, and reminded how wealth is always a relative condition.

In my term as an Elder of my church, I had the privilege of serving communion many times to many people. With another elder I would hold bread or the cup as people walked up to break off a chunk and dip it in the juice. One thing that always amused me was how ninety percent of the people always seemed to tear off the smallest possible piece of bread. I was never sure why this was: we always had plenty left over, and the tiny pieces were obviously difficult to manage based on the number that ended up floating in the cup. If the bread was especially crusty and wouldn’t tear easily, some people shrugged and smiled apologetically for not being able to rip off a smaller portion.

After my dinner conversation, I now wonder if people’s idea of how much communion bread they’re entitled to reflects the abundance or scarcity of their life experience, or if maybe it reflects their perception of what they bring to the table relative to others. The next time I invite people to Christ’s table for communion, I want to tell them Jesus wants them to help themselves to a big ol’ chunk of his grace. At Christ’s table we are all equal, and there’s enough to go around. Don’t be shy – be hungry. Hungry for love. Hungry for forgiveness. Hungry for mercy. Jesus wants us to be stuffed to the gills with all these things. The less you think you deserve them, the more you should consume. Tearing off a morsel that you might actually have to chew on a while isn’t an indulgence … it’s the whole point. Christ didn’t die for us so we could live on crumbs; he died so we could feast on grace.

May the Peace of our Lord Jesus Christ be with you all.