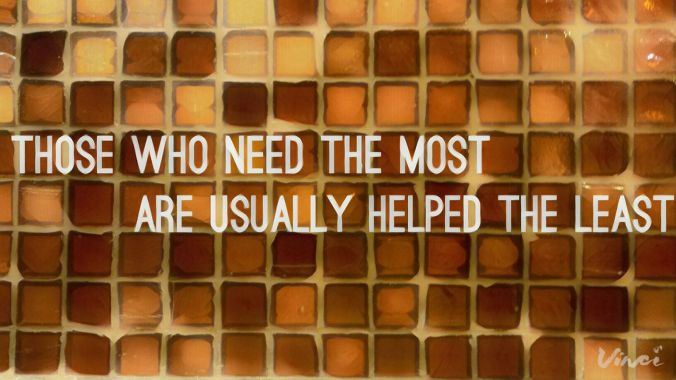 A leader of the synagogue named Jairus moved to the front of the crowd to fall at Jesus’ feet and beg him to heal his dying daughter. Among the crowd who followed Jesus to Jairus’ house was a woman who’d suffered incurable hemorrhages for twelve years. She timidly touched the fringe of his robe, and was instantly healed. When Jesus asked who touched him, the woman tried to hide. After he asked a second time, she fell trembling before him. Jesus said to her, “Daughter, your faith has made you well; go in peace.” Afterward Jesus continued on to the house of Jairus, and though many said the girl had died, Jesus said to her, “Child, get up!” and she did.

Jairus, a man and a religious leader, did not hesitate to force his way through the crowd and demand Jesus’ attention. By contrast, the woman’s ailment would have rendered her unclean; approaching Christ directly would have been unthinkable for her. It was no wonder she hid when he called her out, because according to her culture she should never have touched him and could have been punished. Instead, Jesus stopped to call her Daughter, and bid her go in peace.

Is our society so different? Privileged people still move to the head of the line and ask for what they need, and we usually get out of their way. The less privileged are pushed to the edges, and frequently shamed simply for asking. Whether it’s cash or a voice or a vote, too often we suspiciously insist they justify their requests in ways we’d never expect of the financially or socially affluent. We’ll fork over chunks of cash for a new church social hall, but want reckoning for every dime of grocery assistance. We call them “takers” then wonder why they’d rather hustle than be humiliated. Somehow we are more sympathetic to the poor halfway around the world than the homeless living under a bridge downtown.

Jesus was respectful of everyone in need, regardless of privilege. If we call people out, let it be to say, “Go in peace!”

Comfort: When you are in need, it’s all right to ask.

Challenge: While accountability is important, try to follow your more charitable impulses.

Prayer: God of abundance, help me to remember more for others does not have to mean less for me, and let me be willing to share when others have none. Amen.

Discussion: What’s your favorite charity and why?