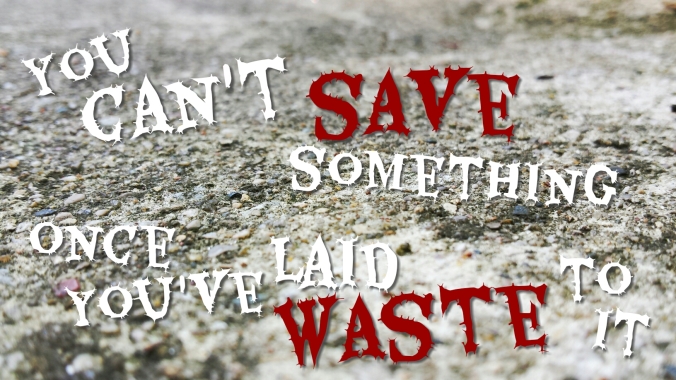 [A] village of the Samaritans […] did not receive him, because his face was set toward Jerusalem. When his disciples James and John saw it, they said, “Lord, do you want us to command fire to come down from heaven and consume them?” But he turned and rebuked them. Then they went on to another village.
– Luke 9:52b-56

It didn’t take long for the disciples to become drunk with the power Jesus had given them. In their culture, refusal of hospitality was a much more offensive act than we would consider it today, but what about their experience with Jesus could have possibly led James and John to believe he would want an entire village utterly destroyed?

In hindsight the proposed Fireball of Vengeance was an over-reaction, but Christians still like to flirt with the possibility. Too often we approach Christianity like an imperial decree, and a reason to punish non-conformists. We want civil laws and corporate policies to reflect our Christian doctrines, and are willing to let the house (and the Senate) burn down before we will compromise to live peaceably with our non-Christian neighbors.

Codifying Christian values into law actually erodes faith by substituting fear of prosecution for voluntary submission to God. We should live out our Christian values (conservative, moderate, or liberal) regardless of civil law. Sometimes that costs us money, status, jobs, or even freedom, but Jesus warned us that would happen. We can’t bring an individual – let alone a nation – to Christ through victim-mentality legislation; we do so by offering a witness that shows how Christ has transformed our lives through grace and love, including love of our enemies (and not the punitive “for your own good” kind of love that demands nothing of us but everything of them).

Even in his confinement, Paul was an influential witness to Christ. In a nation that guarantees the greatest religion freedom in the world, let’s not be so ready to shackle ourselves to theocracy. A life lived in humble service to Christ and the least among us wins souls that religious scorched earth policies would destroy.

Comfort: You can live your faith regardless of what others believe and do.

Prayer: Lord of Heaven and Earth, make me a bold and loving witness for Christ. Amen.

Discussion: Have you ever excused your own less-than-Christian behavior because it was permitted under the law?