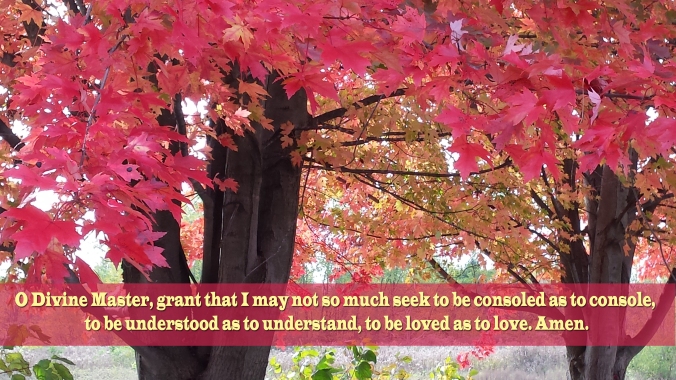 A Pharisee and a tax collector were praying in the temple. The Pharisee thanked God that he was not like immoral people such as the tax collector. He even boasted to God about his tithing and fasting. The tax collector prayed, “God, be merciful to me, a sinner!” Jesus told to this parable to some who were patting themselves on the back for their righteousness while condemning others, and he advised them, “all who exalt themselves will be humbled, but all who humble themselves will be exalted.”

We all like to think we are like the tax collector, but it’s tough. We can’t just not be the Pharisee. The tax collector – who would have been judged by his fellow Jews for working for the Roman empire – never compared himself to anyone. He simply admitted his sins before God and asked for mercy. True humility goes beyond not bragging, to embracing the idea that we could be completely wrong but still trusting in God’s mercy to forgive us and possibly set us right.

When we differ with people on matters of religion, politics, or anything else, it’s natural and easy to talk about why they are wrong. Mostly we talk about it with like-minded people who reinforce our opinions, but sometimes we gird ourselves for philosophical battle. If that happens, are we more concerned with convincing others we are right (which by definition insists they are wrong), or in finding common ground for mutual benefit? It feels good to puncture the balloons of the self-righteous, but when it is designed to shame or demonize rather than serve and love, we aren’t doing the work of the kingdom, because we’ve wandered into Pharisee territory.

Loving our enemies isn’t going to feel satisfying. At times it will feel downright humiliating. Yet that is what Christ calls us to do. If we are to be peacemakers, we need to let go of ego, and then to let go of the certainty that we’ve let go of ego. We are not justified by triumph in this world, but by faith in the realm of God.

Comfort: God doesn’t love you for being right, but for being faithful.

Challenge: In discussions or arguments about sensitive topics, try to understand the opposing point of view (rather than your preconceptions about it) before asserting your own.

Prayer: O Divine Master, grant that I may not so much seek to be consoled as to console, to be understood as to understand, to be loved as to love. Amen.

Discussion: Are there topics you can’t discuss without insisting on your way?

One thought on “Pharisee Territory”