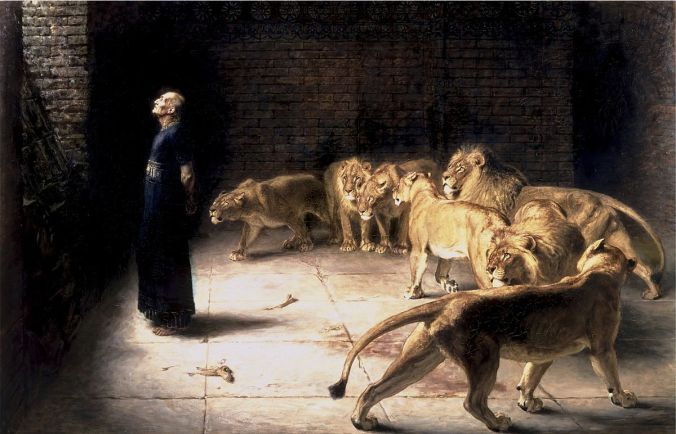 Emperors and kings, queens and prime ministers, presidents and dictators – we associate these people with power. Some – like emperors – seem to have nearly unlimited power, while others – such as presidents – have clearly defined powers. Yet even the power of an emperor is insignificant before the power of faith.

King Darius was heartbroken after his advisers exploited his ego and Daniel’s faith to tricked Darius into condemning Daniel to the lion’s den. Darius tried desperately to find another course of action, but was trapped by his own decree. It seems even an emperor is not more powerful than his own word. He prayed that Daniel’s God might save him, then retreated to his castle for a sleepless night of fasting. In the morning, Daniel emerged unharmed. Darius decreed that all should tremble before the Living God of Daniel. He had the advisers and their families thrown into the den, where they had the same chance as Daniel, but their faith in deception and idols did not serve them as well.

Every ruler (or ruling body) is limited to actions that they believe will allow them to retain power. Sometimes that means observing the law, and sometimes that means creating fear. But in some circumstances they still have to watch the consequences of their actions unfold well beyond the reach of their control. While Darius could do nothing, Daniel’s faith in God saved both of them.

No matter who is technically in control, the moral health of a nation, religious body, corporation, or other entity depends on the faith and basic decency of ordinary people. Regardless of whether the powers-that-be are rooting for us or against us, how we enter the lion’s den matters. The resistance of persistent faith in the face of what seems like certain defeat or destruction changes us, the world, and the powerful.

Margaret Mead famously said: “Never doubt that a small group of thoughtful, committed, citizens can change the world. Indeed, it is the only thing that ever has.” For citizens of the Kingdom of Heaven that commitment is to Christ.

Comfort: Your faith matters, even when you don’t feel like it does.

Challenge: When you feel like your actions and faith don’t matter, pray for understanding of why they do.

Prayer: Mighty God, teach me to find the strength in faith. Amen.

Discussion: What do you feel powerless against? Now what would you tell someone who felt the same way?

Join the discussion! If you enjoyed this post, feel free to join an extended discussion as part of the C+C Facebook group  or visit comfortandchallenge.tumblr.com. You’ll  have the opportunity to share your thoughts with some lovely people. Or feel free to comment here on WordPress, or even re-blog – the more the merrier!