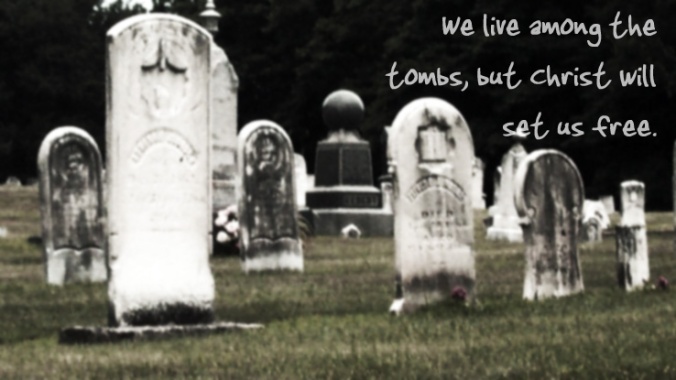 Gospel stories sometimes raise more questions than they answer. While in Gerasene country, Jesus encountered a man living among the tombs because he was possessed by two thousand demons calling themselves Legion. Jesus healed him by driving the demons into a herd of pigs … who then jumped over a cliff into the sea. Now that’s a story that raises an question or two. Was the man actually possessed? Why does no map of that area show a sea? Was anyone reimbursed for the loss of two thousand pigs and a livelihood?

Many people read this story as an allegory about Roman occupation. Its use of “legion” – also a division of two thousand Roman soldiers – and other phrases supports this interpretation.* Given that framework the questions may seem less important, but the story works on multiple levels.

However we understand this story, the reaction of the local people is telling. After Jesus exorcised the man (and drove up the local price of bacon), they reported it to the authorities and “began to beg Jesus to leave their neighborhood.” They treated him more as threat than savior. Despite his demonstration of power over the spiritual realm, fear of their occupiers was greater than their desire to be free. In retrospect we may call them foolish, but human nature often compels us to endure the hardship we know rather than risk the strange, however promising.

Freedom – from demons, from authority, from law – is a scary thing. Like Jesus, it can be wild and unpredictable and ask more of us than we realize we are prepared to give. It can bring down the wrath of those who feel threatened by our freedom, both political and religious. Does that sound overwhelming? When Jesus has presented us with difficult choices between the status quo and the unknown, have we ever asked him to leave the neighborhood? Do we prefer flying under the radar even if it means contributing to our own oppression? Those are the real questions.

Once we are truly free, like the Gerasene demoniac, we can’t imagine going back to life among the dead.

Comfort: It’s OK to be a little intimidated by Jesus. He’ll love you through it.

Challenge: When you feel like ditching Jesus for security, pray for strength.

Prayer: God of freedom, thank you for not leaving me to waste away in the tomb of security, but for breathing fresh, exciting life into me through Jesus. Amen.

*For more about this topic, see this entry in Father Ted’s Blog, which points to some additional references.

One thought on “The Devils You Know”