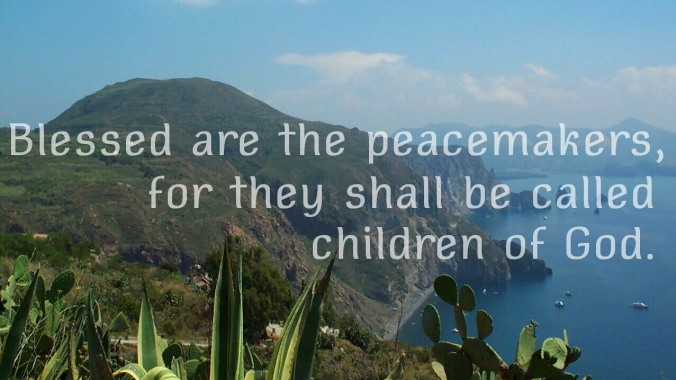 Today’s passage from Matthew is commonly known as The Beatitudes. The word “beatitude” means supreme blessedness or happiness. Jesus is telling the people that God does not just sympathize with those who struggle, but places them first.

The Beatitudes describe a world where an oppressive imperial society (Roman or otherwise) is turned upside down by God’s love. We perceive them as blessings, but to anyone holding or seeking power over others, they are almost threatening. No wonder Jesus warns us those who benefit from the status quo or fear God’s justice will revile and persecute and slander the faithful: his message says that not only is their power illusory, they are ultimately irrelevant to us because our only dependence is on God.

Some critics of Christianity use texts like The Beatitudes to paint Christians as passive and long-suffering. The meek, the mournful, the poor, and the hungry – not anyone most of us would aspire to be. Even the merciful, the pure in heart, and the peacemakers can be caricatured as mere do-gooders or pacifiers.

The truth is, each of these states represents an active engagement in the world and a refusal to accept less than the fullness of God. Mourning is not mere sadness, but grappling with a world steeped in pain. Meekness is a choice of community over self. Peacemaking is a dangerous profession – ask any police officer called to a domestic dispute.

The Beatitudes spell out how we are to be in the world but not of it. We are not called to suffer for suffering’s sake, but may be called to do so when life in the kingdom of God clashes with the expectations of the world. How such persecution can be a blessing is a mystery, but no more a mystery than how the world can turn a deaf ear to God’s call to justice and love. Which of these mysteries do we want to live in?

Comfort: God’s ways are not the world’s ways. The poor in spirit have the kingdom of heaven.

Challenge: What do you think it means to be poor “in spirit?” Read this article and have a conversation with friends about it.

Prayer: Lord, I depend only on you for my spiritual wealth, only on you to satisfy my hunger for justice. Amen.

Discussion: How might it be spiritually dangerous to assume we are persecuted simply because we are Christian?