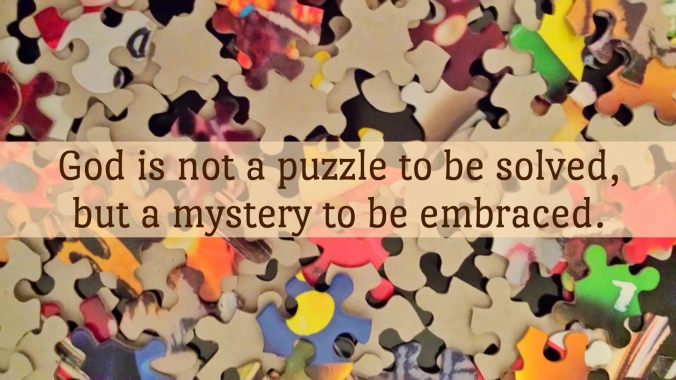 Under ancient Jewish marriage laws, a widow was instructed to marry her late husband’s unwed brother. Theoretically, if that brother died, and there was another brother, she would marry him. And if he died … on down the line.

The Sadducees, who did not even believe in resurrection, tried to trip up Jesus with a hypothetical question about who in the resurrection would be the husband of a woman who’d married seven brothers. Jesus told them nothing as we understood it – including marriage – would be the same.

On one level he was specifically addressing the Sadducees, but on another (and when is anything Jesus says not multi-layered?) he was pointing out the futility of trying to cram God and God’s kingdom into the tiny fragments of human understanding that describe and limit our faith. If we treat them like pieces of a puzzle and try to force them into a single picture, we soon learn that not only are we missing countless pieces, the ones we have may be from different boxes. The only way to fit them inside our desired frame of reference is to tear off the inconvenient bits and pound them flat.

No wonder the picture of Christianity can often make so little sense, especially to outsiders. Not knowing is uncomfortable and scary, so we can waste time rearranging the pieces. This obsession disengages us from the “God of the living” – from life and all its blessed messiness.

An insistence on theological tidiness, especially about unknowable things, doesn’t make us better believers. Mystics of all faiths describe the moment of divine revelation as a surrender to mystery. The wisest people admit to knowing nothing.

Getting stuck in “head” religion ultimately leads to frustration. Thinking you lack spiritual wisdom because you don’t know the right terms or scripture quotes is just not true. God is found in living hearts, not dead paper. Christ is the Living Word not because he appears on Bible pages, but because he rewrites the world.

Rather than “bow down to the work of [our] own hands” by stuffing God into ideas we’ve created, let’s trust that God is present with us in the glorious chaos of life.

Comfort: You don’t have to understand everything – as a matter of fact no one does!

Challenge: Try to give up finding the answer to one question you wish you knew.

Prayer: Infinite God, Lord of all Creation, I am open to your mystery and majesty. Amen.

Discussion: What’s the longest you’ve ever worked on a puzzle before giving up?

3 thoughts on “Puzzling It Out”