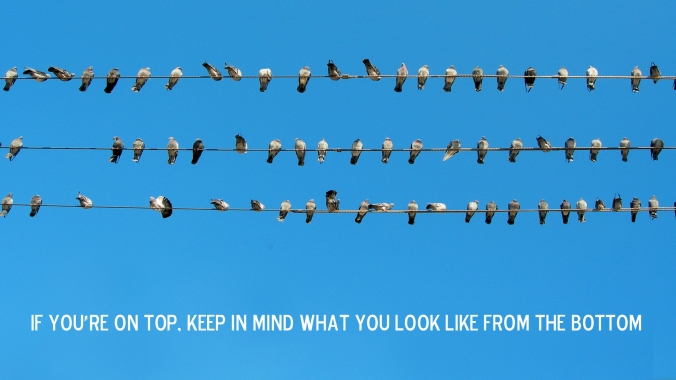 In his various letters, Paul reminds us again and again that in Christ all are equal. However, he also recognized that isn’t the way the world works. In his letter to the Ephesians, Paul tells husbands to respect and love their wives, and wives to obey their husbands. By modern standards that’s a sexist stance, but at the time – when women were the property of their husbands – it was radical. He tells children to obey their parents, and fathers not to provoke their children to anger. In Christ, any authority granted us by culture is not ours to exploit or wield ruthlessly, but to execute justly.

Paul’s words for masters and slaves were controversial then and now, but for different reasons. He told slaves to obey with fear and trembling, and to serve with enthusiasm, and he told masters to stop threatening slaves and to “do the same to them.” Since he didn’t demand outright that slaves be freed, some people who aren’t fans of the Christian faith drag out this passage as if it we an overall Christian endorsement of slavery. (It may not help that some defenders of slavery actually did use this and similar scripture passages to support their position.)

We don’t know what Paul’s feelings about slavery were, since addressing slavery wasn’t his mission (though we do know he intervened on behalf of at least one runaway slave). Paul was introducing the gospel to people in their present circumstances; because he believed the return of the Lord was imminent, restructuring society would have been immaterial.

Of course slavery is utterly indefensible (and its abolition in the west was due in large part to Christian efforts), but let’s remember we still live with many social injustices that are dismissed even – and sometimes especially – by Christians as “the way things are.” From exploiting labor to dumping industrial waste on communities too impoverished to fight it, we are part of a world that turns blind eyes toward injustice. Changing society may be like turning the Titanic around, but what we are willing to tolerate or promote in our lives indicates how closely we take the gospel to heart.

Authority and privilege should be used – and if necessary sacrificed – in service to those who lack them. Unequal roles may be unavoidable, but expressing love, dignity, and spiritual equality within them is always an option.

Comfort: In God’s eyes, you are not defined by your position in life.

Challenge: Exercise any authority or privilege you possess as through it was entrusted to you for the purpose of spreading God’s love … because it was.

Prayer: God of mercy, teach me to be merciful. Amen.

Discussion: Has anyone shown you mercy when they didn’t have to?